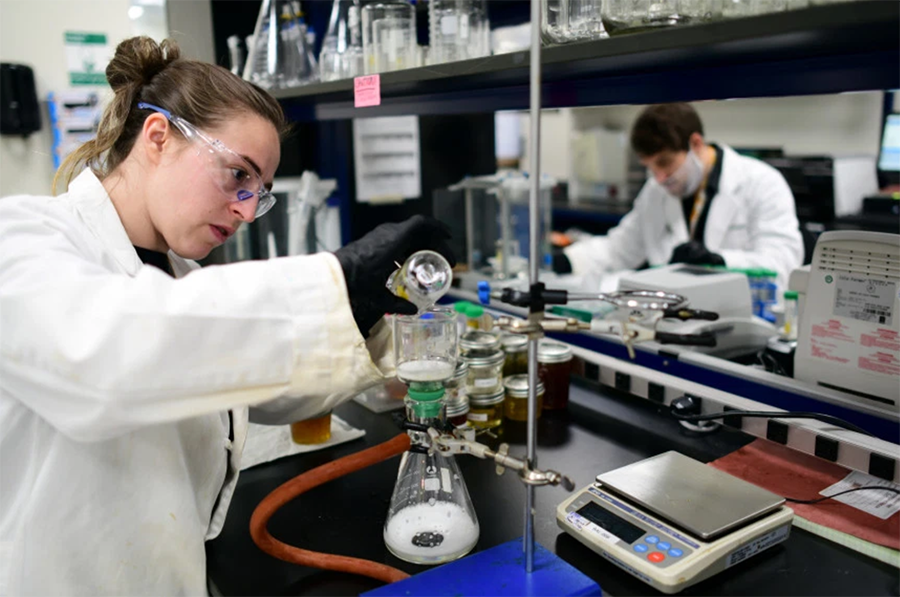 [Canniseur: This is an important new business. I don’t know their business model so I can’t say if they’re viable. However, this kind of business is valuable, so maybe they’ll be able to make it. There only the first and hopefully one of many more to come.]

A Denver-based company hopes to be the state’s first to study the effects of marijuana on Alzheimer’s disease, thanks to a newly available research and development license in the city.

According to the Alzheimer’s Association, 5.8 million Americans have the disease, a degenerative brain disorder that affects a person’s memory and thinking skills. While there are drugs that help ease symptoms, they do not change the course of the disease.

Albert Gutierrez, CEO of MedPharm, sees Alzheimer’s as “one of the biggest things that’s plaguing our country now and in the future.” That’s why he’s excited about cannabis’ potential to treat it.

“We haven’t yet tapped into what this plant can really do to help alleviate the symptoms,” Gutierrez said. “We hear a lot of anecdotal evidence as far as helping with epilepsy or helping with arthritic pain… now it’s time to put the cannabinoids to the test and really understand what cannabinoids and what doses and what delivery methods really help deliver that relief.”

More than 30 states plus the District of Columbia have legalized medical marijuana, but research into the plant has been stifled because it’s still a Schedule I controlled substance under federal law.

Colorado first introduced R&D licensing in 2017 with the passage of House Bill 1367, but left it up to municipalities to individually decide if they would offer it. So far only one company — MedPharm — has ever applied for an R&D license, according to the Marijuana Enforcement Division.

MedPharm obtained its license from the state in 2018 and began growing cannabis and creating a variety of original drug formulas while waiting for Denver to open up city-level applications. If approved, the new license will enable MedPharm to administer clinical trials and develop drugs for them, including placebos.

During trials, MedPharm scientists plan to track how cannabinoids interact with neurological receptors through brain mapping and measuring cognitive abilities and patterns in patient demeanor. They’ll also study how THC, CBD and other cannabinoids are absorbed and metabolized in the body.

Gutierrez expects to begin the first phase of double-blind testing in the second quarter of 2020. Trials will run about six to nine months, he said.

This isn’t the first time researchers have studied the link between marijuana and Alzheimer’s. The Alzheimer’s Association funded at least two studies to look at the plant’s impact on brain inflammation, said Jim Herlihy, senior director of marketing and communication for the Colorado chapter. The results of those studies, which started in 2016 and 2017, have not yet been reported, but Herlihy is encouraged to see new research being pursued.

“The association has been exploring all legitimate avenues of research, from basic research through clinical trials, and investigating chemical components of marijuana and other plants because we understand that traditionally plants are an important source for many life-saving medicines,” Herlihy said.

“A lot of potential”

When legislators passed HB 1367, they hoped it would put Colorado at the forefront of medical marijuana research. Schools such as the University of Colorado and Colorado State University-Pueblo, which is home to the Institute of Cannabis Research, have been doing studies on the effects of marijuana on various conditions such as Parkinson’s disease and cancer. But sponsors of the bill contended there were plenty more opportunities.

“Right now, there’s more research than any one institution could possibly handle, frankly, for the next 10 years,” former state Rep. Dan Pabon said at the time.

Chad Kinney, director of the Institute of Cannabis Research at CSU Pueblo, said research is generally concentrated at universities because of the infrastructure that already exists there, including staff, laboratories and technology.

“The costs of such research tools can be a barrier for many companies, especially smaller ones, to conducting research in-house,” Kinney said by email.

Gutierrez said it cost $12 million to get MedPharm’s facility up and running. Even if big pharmaceutical companies want to get into the industry, many rely on federal funding that could be at risk if they study marijuana, he said.

Denver may also be one of the first cities to opt in to allow marijuana R&D licensing, and Eric Escudero, director of communications at the Department of Excise and Licensing, said he hopes this new opportunity will inspire others to get in the game.

“There’s a lot of potential,” Escudero said. “What Silicon Valley did for technology, Denver can do for medical (cannabis) research.”