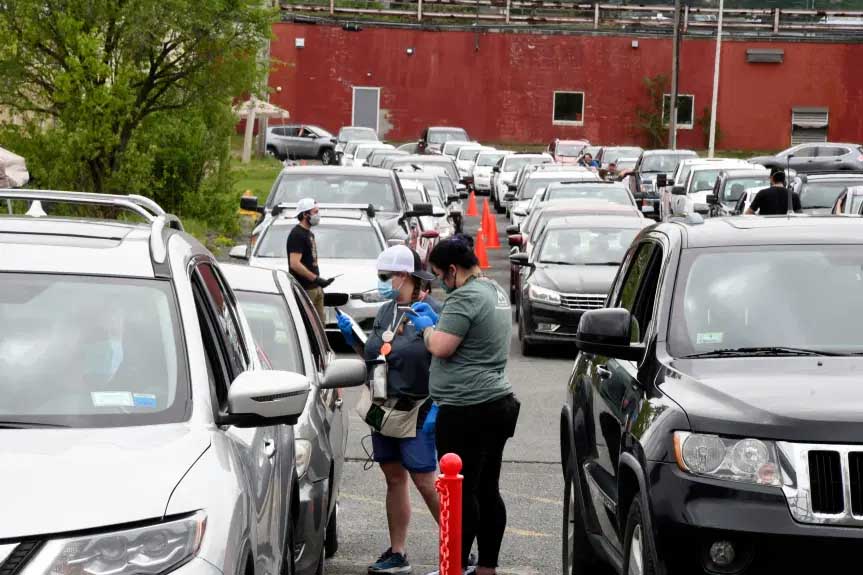 FILE – In this May 25, 2020, file photo, agents Amanda Toma and Ashley Brodeur work with customers outside in the parking lot of cannabis purveyor Berkshire Roots in Pittsfield, Mass. Laws legalizing recreational marijuana may lead to more traffic deaths, two new studies suggest, although questions remain about how they might influence driving habits. Previous research has had mixed results and the new studies, published Monday, June 22, 2020, in JAMA Internal Medicine, can’t prove that the traffic death increases they found were caused by marijuana use. (Gillian Jones/The Berkshire Eagle via AP, File)

[Canniseur: This is the worst kind of journalism. We’re seeing a lot of it lately. The story essentially says that stoned drivers are impaired and it’s a throwback to the 1970s and Nixon. We do not need unsubstantiated and uncorroborated stories like this. We call bogus on this story.]

The Associated Press recently disclosed the results of two new studies attempting to determine the impact on traffic deaths in states that have legalized recreational marijuana.

Both suggested that laws legalizing recreational marijuana may lead to more traffic fatalities.

We wouldn’t think a comprehensive study would be required to reach that conclusion.

The studies published in the Journal of the American Medical Association reflect previous research, which couldn’t substantiate that the traffic death increases found were caused by marijuana use.

One study found 75 more traffic deaths per year after retail sales began in Colorado in January 2014, compared with states without similar laws. But it found no similar change in Washington state. However, when the two-state study was done, pot stores were more densely located in Colorado than in Washington, which could have made the drug more readily available, the authors said.

Both reviews culled several years of traffic death data from the National Highway Traffic Safety Administration before and at least two years after retail sales of recreational pot began in the states examined.

The studies’ lack of a definitive link between additional traffic fatalities in recreational-pot states stems from their inability to determine whether motorists were under the influence of marijuana when the crash occurred.

Since marijuana can remain in human tissues for several days, even if toxicology tests detected it in a fatal crash, that wouldn’t prove the driver was impaired, said co-author Magdalena Cerda, a New York University researcher.

Gov. Charlie Baker tried to close that loophole with a bill that would give police new tools to crack down on drug-impaired drivers.

That legislation, based on recommendations from the Special Commission on Operating Under the Influence and Impaired Driving, would extend restrictions similar to those already in place for alcohol impairment to motorists affected by or in possession of marijuana.

While we certainly agreed with the governor’s attempt to crack down on impaired driving, the differences between alcohol and marijuana don’t lend themselves to similar enforcement.

It’s been established that THC — the main psychoactive compound in marijuana responsible for the “high” sensation — remains in the blood stream far longer than its incapacitating effects, thus rendering a Breathalyzer-type test inconclusive or misleading.

That also seems to be the opinion of the state’s highest court. In a 2017 ruling, the SJC said field sobriety tests typically used in drunken-driving cases cannot be treated as conclusive evidence that a motorist was operating under the influence of marijuana.

In this state, the concern over driving while stoned redoubled the public-safety sector’s awareness efforts last December during the holiday season.

The Executive Office of Public Safety and Security purchased televised advertisements, gas station TV spots and posters for bars and restaurants warning about the dangers of impaired driving, focusing on marijuana.

We don’t need high-brow medical research to realize that in Massachusetts and other recreational-pot states, your chances of running into a substance-impaired motorist can only increase.

And that collision could cause serious injury or death.