[Canniseur: The Library of Congress has published long-overdue documentation of the racist news coverage used 80 years ago to justify the criminalization of cannabis. The media was complicit and racist in its printing of stories leading to the eventual ban of marijuana. We know this racist-inspired decision was spearheaded by Harry Anslinger in the 1930s. Anslinger was a rabid racist. Cannabis was made illegal in 1937 and this documentation only goes to 1915, but it’s a start.]

The Library of Congress (LOC) is documenting racist depictions of marijuana in early 20th century news coverage that helped to drive the criminalization of cannabis, highlighting sensationalized articles about the plant that the federal research body says effectively served as “anti-Mexican propaganda.”

As part of the institution’s “Chronicling America” project, which digitizes media from throughout U.S. history, LOC published a timeline last week that gives examples of headlines concerning cannabis from 1897 to 1915.

“From the late 19th to early 20th century, newspapers reported the early rise of marihuana (known today as marijuana),” the post states. “Alarming reports of the menace of marihuana reach the United States press. Tales of alleged atrocities fueled by the drug are often tied to anti-Mexican propaganda.”

On a landing page featuring links to the digitized newspaper clippings, LOC warns: “Some of the linked articles contain ethnic slurs and offensive characterizations.”

One early article on marijuana, published in The Sun in August 1897, said that the plant “continues to impel people of the lower orders to wild and desperate deeds.”

In a separate 1897 piece in the Tombstone Prospector, which reported on an alleged attempt to smuggle cannabis into a prison, marijuana is characterized as “a kind of a loco weed which is more powerful than opium.”

Via Library of Congress.

“The Mexicans mix it with tobacco and smoke it in cigarettes, which causes a hilarity not equalled by any other form of dissipation,” it continues. “When smuggled inside the prison walls the Mexicans readily pay $4 an ounce for it, but outside it is only worth about 50 cents an ounce.”

One 1887 Memphis Appeal piece ran with the shocking headline, “Senseless Brutality. A Mexican Priest Flogs the Corpse of a Dead Wizard.”

A 1904 article—titled “Dangerous Mexican Weed to Smoke”—relays a story about two people who got the “marihuana habit,” consumed cannabis and “after a few minutes ran amuck” before being hospitalized.

“It is feared that the two men, if they recover from their wounds, will lose their minds permanently, as is the case often with marihuana smokers,” the report said.

Even early articles on marijuana policy contained language that stereotyped marijuana as a “Mexican drug” or “Indian hemp,” as was the case in an El Paso Herald piece published in 1915 after the City Council approved legislation to prohibit cannabis.

The Ogden Standard in 1915 published a story that features especially racist language. 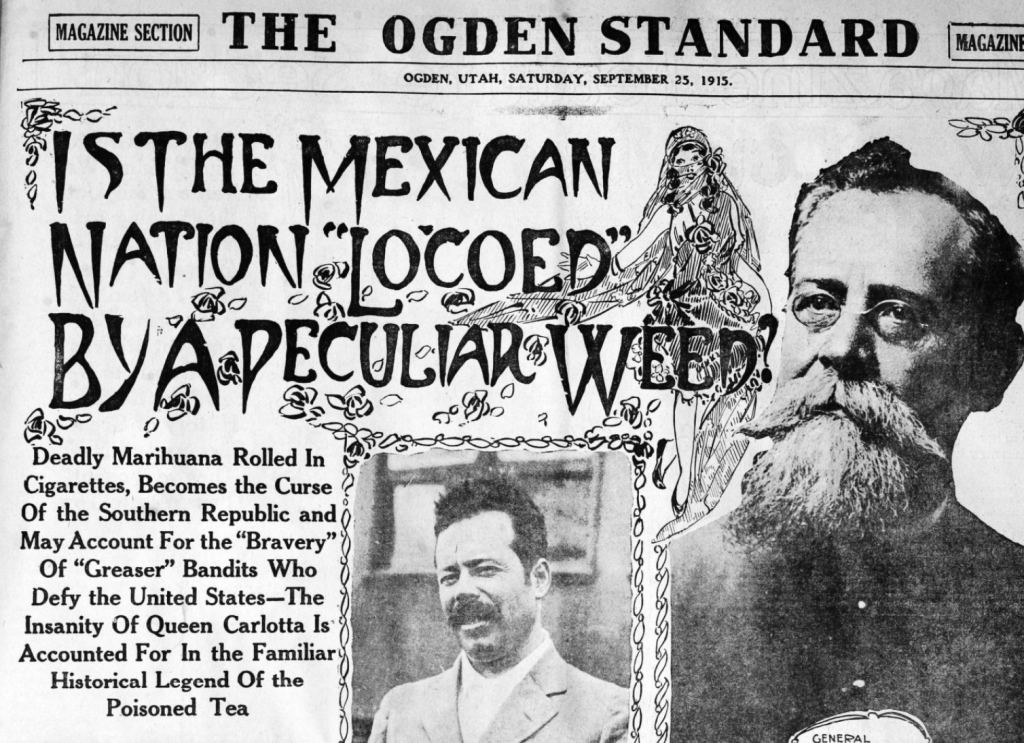 Via Library of Congress.

“Are the Mexicans becoming a mightier and braver race, or in the language of Texas, are they becoming ‘locoed?’” the article asks. “Reports received here indicate that the sudden burst of bravery on the part of the Mexicans is due to an increased use of the weed known as Marihuana, which has much the same effects as opium or morphine on its users.”

“When a Mexican is under the influence of Marihuana he imagines that he can, single-handed, whip the entire regular United States army, while if reinforced by several other Mexicans, he might include a few European nations in his dream conquests,” it continues. “While under the influence of marihuana Mexicans are liable to commit murder and when arrested give the authorities great trouble.”

Such openly racist rhetoric around cannabis has largely dissipated from news coverage in recent years as support for ending criminalization continues to grow. But as numerous policymakers have pointed out, the racial inequities associated with enforcement of prohibition laws are far from gone.

Sens. Bernie Sanders (I-VT) and Cory Booker (D-NJ) discussed the role of marijuana criminalization and the broader drug war in perpetuating racial injustices last week, and they remarked on how black people are significantly more likely to be arrested for cannabis possession compared to white people despite similar rates of consumption.

Virginia Gov. Ralph Northam said that the passage of cannabis decriminalization legislation this year represents an example of how his state has addressed racial inequities that are inspiring mass protests in the wake of police killings of black people such as George Floyd and Breonna Taylor.

Booker also recently said racial disparities in marijuana enforcement is an example of a systemic injustice that underlies the frustration of minority communities.

That measure came one week after 44 members of the House sent a letter to the Justice Department, calling for an independent investigation into a fatal police shooting of Taylor in a botched drug raid.

In New York, there’s a renewed push to pass a package of criminal justice reform legislation that includes a bill to legalize marijuana.

The head of a federal health agency recently acknowledged racial disparities in drug enforcement and the harm that such disparate practices have caused—and NORML asked her to go on the record to further admit that this trend in criminalization is more harmful than marijuana itself.

Photo courtesy of Library of Congress.

Library Of Congress Highlights Racist News Coverage Used To Justify Criminalizing Marijuana A Century Ago was posted on Marijuana Moment.