[Canniseur: In these days of COVID-19, I’ve been missing my favorite time in sports (unless the Cubs are in the World Series) and that’s March Madness. It’s the one thing the NCAA gets right and I’m having a total Jones for it. Along comes this; Strains Madness! YES! I’ve never had Biscotti, but if it beat Blue Dream, I’m headed to the dispensary now! We’re down to the Dank Sixteen. If you want to vote, head on over to the Weedmaps Instagram account.]

This story was originally published on Weedmaps as Weedmaps Strains Madness

The 1st round has come to an end and WOW have the mighty fallen. Only one 1st seed (OG Kush) made it out of the first round, the rest were upset by the 8th seeds, including both wild card write-ins. Here’s a look at how all the matches ended: 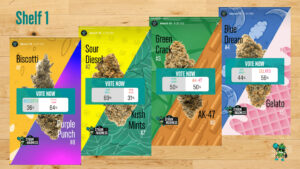 Before we jump into the second round matchups, we want to give a big thank you to everyone who voted. Nearly 62,000 votes were submitted in total through Weedmaps’ Instagram stories.

And with that, let’s dive into the 8 second-round matchups and the 16 strains competing.

In a surprising upset, the wild card Purple Punch pummelled 1st seed Biscotti, taking in 64% of the votes. Purple Punch is going up against Sour Diesel, a classic strain that easily dismissed Kush Mints in round one. I think this is where Purple Punch’s luck ends and expect to see Sour Diesel advance, but we could have another upset in the making.

Green Crack and AK-47 tied the on the first vote before Green Crack took the match in a shortened second vote. Gelato came up victorious in its much-publicized first-round matchup with Blue Dream. Green Crack is a utility strain going up against Gelato’s higher profile. The winner should be a good indicator of what kind of weed you all favor.

The most dominant performance in the first round went to OG Kush, which crushed Pink Panties. OG Kush was one of only two strains to get more than 3,000 votes, so it’s safe to assume it should handle 7th seed Northern Lights with ease. But we’ll have to see.

GG4 escaped a fairly close skirmish with Forbidden Fruit winning by just 281 votes, the closest contest (besides the tie). It will face Wedding Cake, which had a breezy first round against Cherry Pie. I don’t think Wedding Cake is going to have it as easy in the second round considering how battle-tested GG4 is. Whoever advances should have a tough, but a winnable matchup with OG Kush.

I had a feeling Jack Herer was going to stomp on Acapulco Gold. You all loved Jack, but you also loved Godfather OG nearly as much. Jack Herer got 2,376 votes to Godfather OG’s 2,300, a mere 76 vote difference. Fingers crossed this one comes down to the wire.

Granddaddy Purple didn’t break much of a sweat against 24k and easily advanced to the next matchup. Unfortunately, it will be facing up against Pineapple Express, which was the other strain to get more than 3,000 votes. Pineapple Express has a ton of momentum, we’ll see if it continues in this second-round matchup.

It proved to be a respectable matchup, but Alien OG ended up knocking out GSC fairly decisively, 58% to 42%. But Sherbet comes out of the first round looking strong. While Alien OG took in 2,226 votes, Sherbet brought home 2,462 votes in the first round. Perhaps Sherbet had weaker competition (sorry Harlequin), but if momentum stays the same this should be a close matchup to watch.

Afghanistan v. GMO Cookies is a solid matchup. GMO Cookies had a little bit more momentum once the first round was all said and done, but this should stay a close matchup.