Could Endocannabinoid Deficiency Syndrome Be the Cause of IBS and Migraines? 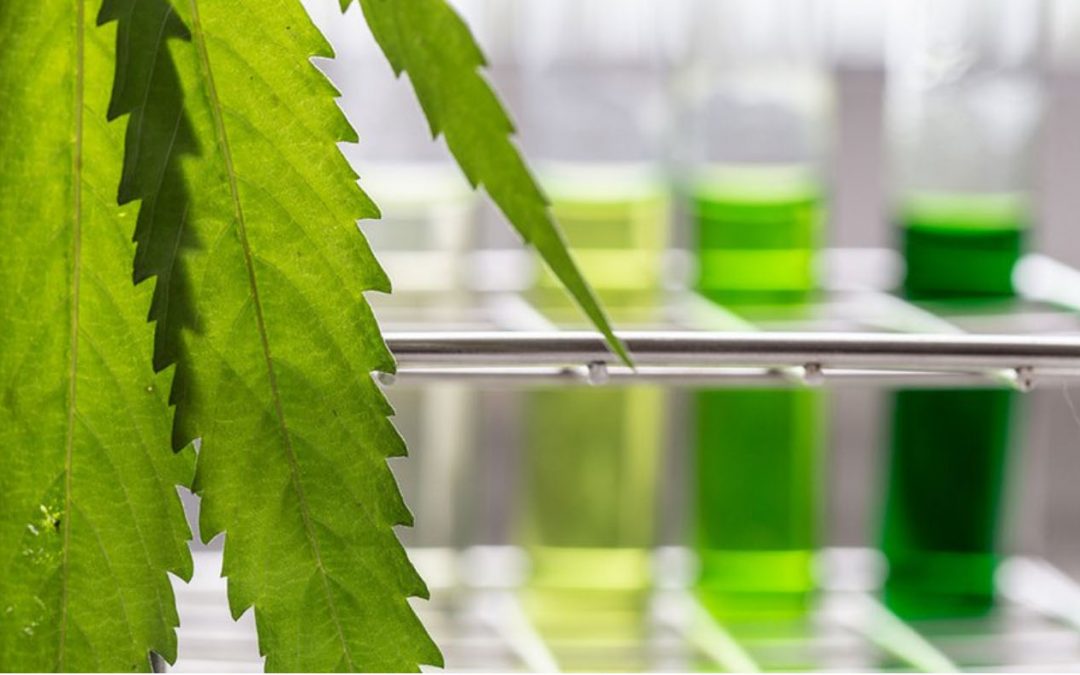 A small group of scientists and doctors believe a lack of endocannabinoids could explain the causes behind little-understood medical conditions like fibromyalgia, IBS, and migraines.

Cannabis seems to treat an impressively wide range of medical conditions, from chronic pain to eating disorders to depression to cancer. Researchers suggest that weed may appear to be a universal panacea — a miracle drug, if you will — because the plant’s compounds may help maintain our body’s endocannabinoid system.A refresher: The endocannabinoid system is a physiological system like the respiratory system or the nervous system. Although scientists only discovered it about three decades ago, it may be one of — if not the —  most important developments in medical history.The endocannabinoid system regulates our body’s homeostasis, a state of harmonic balance where everything works as it should. It’s also key to our nervous system’s ability to communicate with other cells, tissues, and organs. Learning, memory formation, appetite, immune response, and healing are all controlled by the endocannabinoid system. Think of it as the part of our bodies that connects the brain with everything else, both inside of us and out in our surrounding environments. Without this system, the evolution of ‘higher’ lifeforms likely wouldn’t have happened (at least, not according to our current understanding of biology). 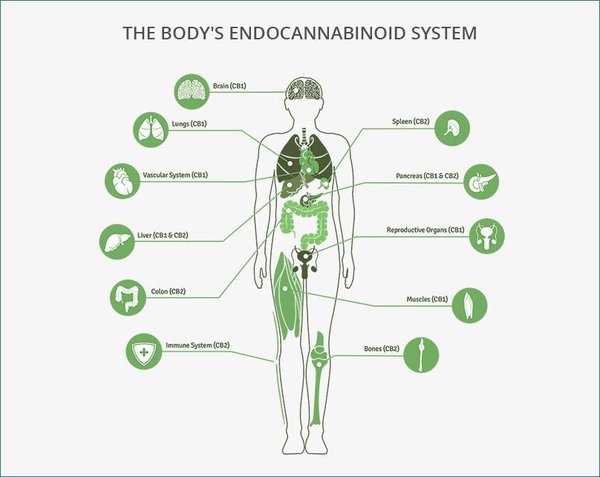 Cannabinoids bind to cell proteins called cannabinoid, or CB, receptors. CB receptors act as locks on a cell, and cannabinoids essentially unlock them to trigger cell signaling. One of these receptors, CB1, mainly resides in the nervous system. Another receptor, CB2, can be found in the spleen and on immune cells.

THC, the cannabis compound that gets people stoned, binds tighter to CB1 receptors in the brain than it does to CB2 receptors in the immune system. This may be why THC couch-locks tokers and CBD doesn’t.

Raphael Mechoulam, PhD, the “godfather of cannabis science” who first isolated and characterized THC in the late 1960s, believes anandamide behaves just like THC in the body. He suspects that anandamide, administered in the correct amounts, could even generate a “high” identical to THC’s, though, to date, no human subjects have been given pure anandamide to test this out. 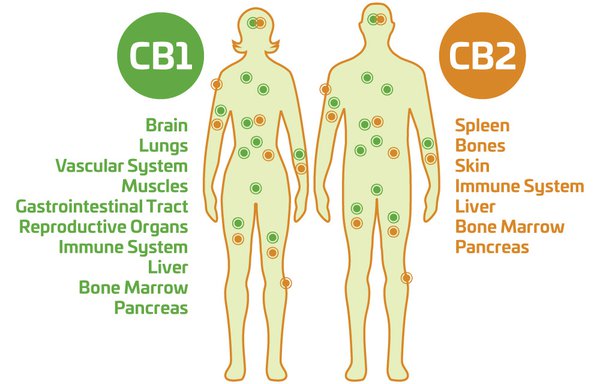 According to one neurologist, certain medical conditions — namely fibromyalgia, migraines, and irritable bowel syndrome (IBS) — share one thing in common: the patients typically exhibit low endocannabinoid levels. Furthermore, these three conditions are comorbid, meaning patients diagnosed with one usually have another, if not all three.

In 2001, while working as a scientific advisor to GW Pharmaceuticals, Dr. Ethan Russo first proposed what he calls “clinical endocannabinoid deficiency,” or CECD, in a paper about migraines. In recent years, this term started going by another name, “endocannabinoid deficiency syndrome,” or ECDS (Russo prefers the former). Both terms refer to the same hypothetical condition.

What is endocannabinoid deficiency syndrome, and what are its symptoms? Many of the details are still being worked out, but chronic pain, rampant inflammation, insomnia, fatigue, depression, lack of appetite, and irritability are common issues associated with it.

Rather than being a disease that always triggers a specific set of symptoms, ECDS may manifest differently among patients, depending on their environments, lifestyles, diets, and genetic make up.

But what if there’s more to this? What if these various maladies are all connected somehow? And what if cannabis, by restoring endocannabinoid function, could successfully treat conditions caused by low endocannabinoid levels, conditions that have proven difficult, if not impossible, to control through conventional medicine? 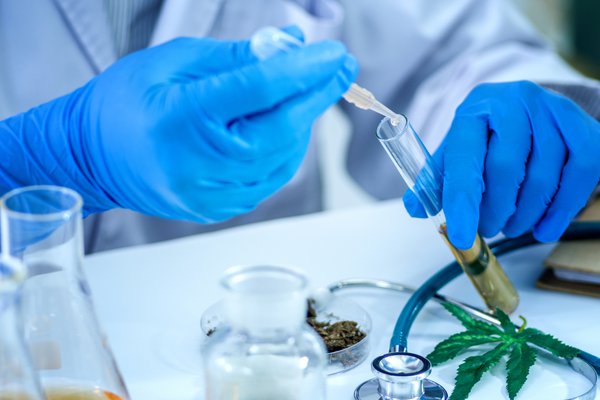 A Medical Diagnosis Based on the Body’s ‘Natural Marijuana’

Initially, Russo suggested that migraines could be caused by low anandamide levels in the brain. Because sharp, throbbing pains always accompany migraines, research suggests a pain-killing compound like anandamide could keep them at bay. Both anandamide and THC — the intoxicating part of cannabis — activate the endocannabinoid receptors in our nerves. In other words, migraine patients who consume marijuana may be self-medicating by adding the plant’s version of anandamide back into their bodies.

Since Russo first proposed endocannabinoid deficiency syndrome, its related disorders expanded to include several other ailments. And their causes have eluded medical science, not unlike fibromyalgia and IBS. But given news that medical schools didn’t teach their students about the endocannabinoid system until the last few years, is the medical community even aware of this syndrome?

“There’s an awareness of this condition, and it is getting noticed. And there’s a good deal of research that’s been done on it,” Russo told MERRY JANE over the phone. “What’s happened in the ensuing 18 years [since proposing ECDS/ECDS] is we’ve gradually built up objective evidence showing that people with some of these syndromes [like IBS or fibromyalgia] do have differences between their endocannabinoid content either in their blood or in the cerebrospinal fluid in their brain.”

Russo cited a few eye-opening studies that back him up. One 2013 paper looked at people diagnosed with PTSD shortly after witnessing (or outright experiencing) the 9/11 terrorist attacks in New York. Serum analysis showed these patients produced less anandamide and 2-AG, which are both crucial for regulating stress responses.

Additional studies confirmed that constant stress dulls the endocannabinoid receptors from responding to chemical signals, which may explain why the body reduces its anandamide and 2-AG production when life gets extremely difficult.

Researchers have also detected abnormal endocannabinoid function in people with autism spectrum disorder, some cancers, motion sickness, and epileptic seizure disorders. These conditions, like migraines, can be treated with cannabis, too.

How does ECDS explain these disorders, and how can cannabis treat them? Let’s take a look at one endocannabinoid deficiency-related condition, irritable bowel syndrome, to get a better understanding of how cannabis could treat it on multiple levels. 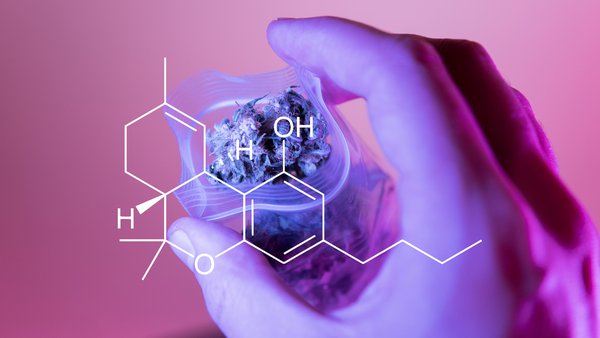 IBS and ECDS: How Are the Conditions Related?

Irritable bowel syndrome or irritable bowel disorder is a common ailment that affects anywhere between 25 million to 45 million Americans. Two-thirds of IBS patients are female, and the condition appears in patients across all age groups.

IBS’s symptoms include bloating, digestive inflammation, rampant flatulence, upset stomach, diarrhea at random hours (especially in the middle of the night), constipation, ulcers, and a hypersensitivity to all sorts of everyday foods and food additives. Untreated, IBS can lead to anemia, iron deficiency, or dehydration.

The symptoms of IBS have been thoroughly identified, but how it happens remains a mystery. Doctors know that genetics, immune response, serotonin dysregulation, and the digestive system’s microbiota all play a role. But to what extent these factors influence IBS, and how they’re all connected, is unknown.

Enter a new perspective on IBS, one viewed through the lens of ECDS.

According to Russo, the endocannabinoid system regulates every level of IBS, from anti-inflammatory signals to serotonin signaling to maintaining the delicate balance of bacteria in the gut. Traditional medicine takes an inefficient approach to dealing with IBS. Doctors typically treat it by prescribing drugs for its various symptoms: a pill to reduce the gas and bloating, another pill to reduce inflammation, another pill to reduce gastric acid, another pill to make the ulcers go away, a laxative for constipation, and so on.

Yet, if ECDS can explain why IBS even happens, then consuming some cannabis could both replace all those pills and correct the condition’s root cause, a dysfunctional endocannabinoid system. 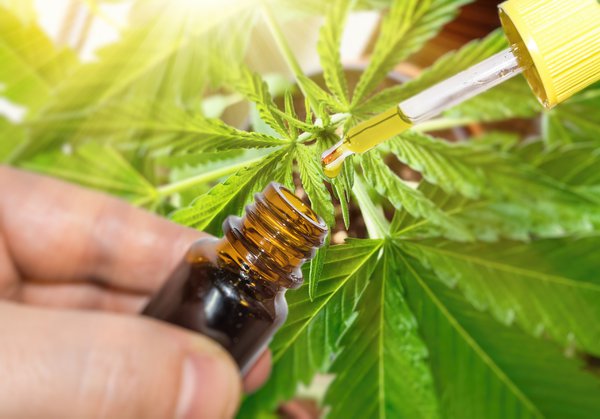 Medical syndromes, like the proposed ECDS, are not disease-states in and of themselves. Rather, they describe a set of symptoms that share underlying causes, usually genetic in nature. Since the genetic science behind endocannabinoid activity is still in its infancy, endocannabinoid deficiency syndrome remains hypothetical. Doctors can’t diagnose it because it’s not officially recognized by the big-name medical associations.

If the science pans out, and Russo’s hypothesis is proven correct, then cannabis could be one of the most prevalent and effective medicines for treating ECDS and its related conditions. Depending on where the research takes us, it’s possible that cannabis breeders could produce new marijuana strains tailored to endocannabinoid-deficient conditions like fibromyalgia or IBS.

Of course, pharmaceutical companies will want in on the game, too. (Just kidding: They’re already in the game.) Pharmie-grade mixtures of less common cannabinoids — like CBG, CBN, or THCV — could alleviate the chronic symptoms of fibromyalgia, migraines, IBS, or other issues related to ECDS that conventional pharmaceuticals have failed to treat.

“We should view cannabis not as a medicine, but as an essential nutrient,” Melamede said during the Harvard lecture. “Every illness that cannabis helps reflects a nutritional deficiency.”

Supplementing a balanced diet with omega-3s helps the body produce more endocannabinoids — which is why doctors and health-nuts promote omega-3s, even if they don’t know why, exactly. Omega-3 fatty acids, such as those found in avocados, coconut oil, grass-fed beef, and fish, are the precursors to our own endocannabinoids. Our body basically makes its own weed from healthy fats. 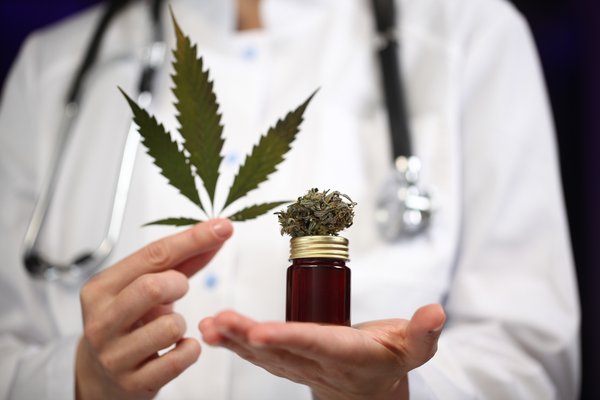 What Would It Take for ECDS to Become a True Diagnosis?

So let’s assume that ECDS is a real thing. How would medical scientists get the syndrome into medical textbooks?

“There’s abundant evidence now, but it’s not widely recognized or necessarily accepted by the medical community,” Russo said. Achieving said recognition may prove difficult, as he described the same medical community as one “which has managed to ignore a lot of high-quality work on cannabis-based medicines.”

As an example of American medicine’s denial of marijuana’s therapeutic potential, Russo mentioned Marinol, a synthetic THC formulation used to treat spasticity and nausea. Marinol doesn’t contain THC extracted from the cannabis plant. Rather, its active ingredient is a purely artificial, human-made version of THC. The drug, which received FDA approval in the early 1990s, is currently classified as a Schedule III drug, whereas plant-derived THC remains at the most-restrictive category of Schedule I. This is despite the THC in Marinol being nearly identical, chemically, to the THC found in cannabis.

“To be honest,” he continued, “given the availability of Marinol in the US, a prerequisite to [getting ECDS recognized] would be clinical trials showing safety and efficacy [of cannabinoid-based medicines]. That’s what most physicians would accept.”

In other words, if you’re waiting to get a medical cannabis recommendation for ECDS, you might have to wait a few years. Or more. With the exception of experimental drugs admitted into the FDA’s Fast Track program, it can take nearly a decade before a pharmaceutical receives FDA approval. Even with Fast Track designation, drug approval can require years of investigation. With cannabis-based medicines containing plant-derived THC, approval could take even longer.

For starters, clinical trials aren’t simple to conduct. Research doctors must apply to the FDA to legally perform the trials on living, breathing human subjects. To even get to the point of testing something on people, drug researchers must pass preliminary clinical trials on animals like rats or monkeys.

If a cannabinoid medicine appears safe in animals, doctors can potentially try it on humans, but only after receiving FDA approval — which the FDA can be pretty stingy about, especially when it comes cannabis. To date, the FDA has only approved one drug made from cannabis, Epidiolex, which is only prescribed to seizure patients. All other CBD products sold in the US are not FDA-approved nor are they regulated by any federal agency.

However, there’s another cannabis-derived pharmaceutical out there, Sativex. Sativex, made by the same company that made Epidiolex, GW Pharmaceuticals, is a mixture of THC and CBD. While it’s available in Europe, parts of Asia, and the Middle East, it’s not available in the US. In 2017, the CEO of GW Pharmaceuticals told MERRY JANE that the company didn’t pursue FDA approval for Sativex in the US because there were too many bureaucratic hurdles, and Sativex likely wouldn’t receive FDA approval in a timely manner simply because it contains plant-derived THC.