What’s in Your Stash? Sue and Lee, 420 Old Fat Lesbians

[Canniseur: Sue & Lee are in the news again. These are real people, doing real life, and on their own life path. They happen to enjoy cannabis, happen to be lesbians, old, and in their own words – fat. What they are doing, is helping to normalize cannabis. The reality is, we are all different from each other. But THC can be the great equalizer. Take it from me (an old, cannabis-loving lesbian) there are way more of us than you may even suspect. Good for them for going public.]

State of Maine medical cannabis patients, Sue and Lee, took to Instagram as #420oldfatlesbians, with the sub-heading of “The Likes of Dykes,” just eight months ago. Profiled shortly thereafter in High Times, with 70,000 followers garnered in just one month, nearly a year later, they humbly host more than 100,000 devoted followers, to date.

With hashtags like #gaymarijuana, #thingstodowhenyouarehigh, and #207stoners, denoting their current locale, the two share their outings around town, shopping, eating, and just basically goofing off for the camera above and below the sheets. Their antics prove you don’t have to be young, thin, well-endowed, and straight to have a good time as a social media influencer, while high.

Sue and Lee both grew up in Chicago and traveled in the same circles, frequented the same bars – with both working in the same suburb at one point in time. But they didn’t actually meet until 20 years after they both relocated, individually, to Florida in the mid-80s.

“We met online at Plenty of Fish in 2007, and realized we were 90 miles away from each other in Florida,” they said. “We moved to Maine together because we were tired of the heat after 30 years, and missed the seasons. We’ve been married four-and-a-half years now, and are happy to be together in the third trimester of life.”

With their newfound notoriety, the two enjoy visiting dispensaries and meeting followers in real time.

“We like to check into dispensaries, visit farms, and showcase products in our Instagram story and feed while destigmatizing weed use for older people, fat people, all walks of life,” they said. “We have a fairly even ratio of all segments of our name following us – 420 peeps, old, fat, and lesbians. Some people envelope two or three parts of our name.” 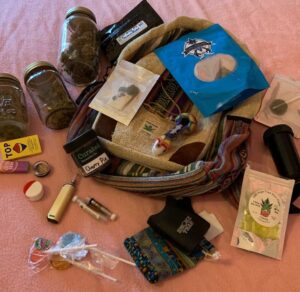 Courtesy of Sue and Lee

Since they are relatively new to New England, making the rounds to dispensaries and farms is also a part of settling in, meeting neighbors and getting to know the cannabis community at large in their tiny state.

After suffering a heart attack in March of this year, Lee’s doctor said to stay clear of burning flower, advising the use of a vaporizer instead, stick with edibles, and to stay away from sativa, as it can raise the heart rate.

Sue had been an end-of-life caregiver in Florida, prior to the state being legal for medicine or recreation. In Maine, Sue began making edibles for both of them, as years of caregiving causes chronic back pain. Yes, caregivers need caring, too.

“The edibles were more effective than the opioids for pain,” Sue explained. “Lee also had neck surgery, where they placed a mesh cage in her neck years ago at C4 through C7. There’s muscle deterioration around it, and several areas of arthritis. Cannabis, used in smaller doses throughout the day has really helped control the pain and muscle spasms.”

They consume every day, low-dosing throughout with 10 milligram doses. They also supplement with CBD candies, and smoke and vape, as needed, for physical ailments and sleep.

Their stash is ever changing, depending on what they’ve picked up around town. Cherry Pie is currently being enjoyed from Southern Maine farmer, Curated Cannabis, met on the same day they were introduced to Calico Cannabis – the flower in the blue bag.

“The State of Maine allows us to legally grow nine plants per person if you are a medical card holder,” they said. “It’s our second year growing and we love it! This year we grew multiple cultivars, such as, Berry Girl, Purple Trainwreck, Pineapple Fields, Tangelope, Juiceman, White Widow Hybrid, and Orange marmalade.”

Within their stash are papers du jour, of Top; not a favorite, just what’s in current use. The vape pen by Ooze Life is special, with them sharing that the battery is super-efficient, and the pen has three temperature settings.

They also like smoking from glass in a pinch, though no burning flower for Lee. Glass purchased from The Honest Headshop, from Brothers With Glass; all in a hemp backpack by Pure Hemp.

Colorful suckers and assorted candies from the Ganja Candy Factory, out of Portland, Maine are a go-to; along with a 10 milligram Lemon Pound Cake Bite by TGC Seeds; and assorted medicated candies, concentrates, bubble hash and a little resin. Flower is sometimes sourced from local shop, Hive Medicinal, in Chelsea, Maine.

Taking the Stage for Inclusion

Breaking stigmas is something cannabis patients and partakers strive for, and education is everything. What better way for a pair of older, overweight, lesbians to make a difference with humor – putting themselves out there, taking it for the team, so to speak.

With humor and intelligence – well, more humor than not, these two are making a huge difference, not only for those who medicate and recreate responsibly with cannabis, but also in the way LGBTQ are accepted into the once homophobic and male-dominated cannabis community.

“The rise in our social media attention took us by surprise,” they shared. “We receive several messages a day from people letting us know we’ve helped them – either through humor or just being who we are and being out there. We are filled with gratitude and humility.”

The two also knew right away that they wanted to interact with their followers in a very personal way, stating, they do not understand the point of having an account if one doesn’t take the time to communicate when someone is kind enough to follow and comment.

“We’re grateful we can contribute in some small way to destigmatize weed use for older people, fat people – all walks of life,” they concluded. “Everyone has been respectful, kind and thankful for our representation. We’ve made many new friends here in Maine in the cannabis community, nationally and internationally, as well. We’ve been accepted with open arms and hearts.”

What’s in Your Stash? Sue and Lee, 420 Old Fat Lesbians was posted on High Times.