Review: ‘Weed: Everything You Want To Know But Are Always Too Stoned To Ask’ Is Instructive Fun

Original Post: Cannabis Now: Review: ‘Weed: Everything You Want To Know But Are Always Too Stoned To Ask’ Is Instructive Fun

[Canniseur: This book is not just for newbies, but it’s also for those who are fairly experienced. There’s a plethora of information in the book as well as it being fun to look at. Enjoy.]

A lot of people labor under the impression that when something is cute, that thing is not worthy of serious regard. Terming art, literature or even people ‘cute’ can be a roundabout form of dismissal, a qualifier meant to soften some later blow: “Yes, it’s cute, but…”

Michelle Lhooq’s non-fiction book, titled “Weed: Everything You Want to Know But Are Always Too Stoned To Ask,” is undeniably cute. Its kelly green cover, decorated with pink and white doodles by illustrator Thu Tran, is a reliable indicator of the book’s tone and content in the best way possible. But just because Lhooq’s debut book is cute doesn’t mean it lacks substance. In fact, it’s veritably overflowing with information.

“Weed: Everything You Want to Know…” is divided into six sections: How It Works, How to Smoke, How to Make, How to Grow, How to Be and How to Score. Each of these sections contains a variety of inserts and asides, from straight how-tos like recipes and joint-rolling instructions to dispensary reviews, jokey illustrated lists and annotated diagrams explaining things like the inner workings of pipes and bongs. 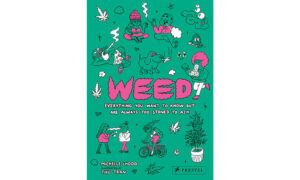 Lhooq is a seasoned party journalist (yes, it’s a thing, and yes, it’s as cool as it sounds) who’s hosted “weed raves” on both coasts, and her bona fides as a writer and as a genuine head shine through in all 159 pages of this book. She’s a sharp, entertaining writer who manages to avoid condescending to her pool of presumably greener potheads-to-be. Although I found myself skimming some of the more basic sections, like the earlier ones describing various terpenes and cannabinoids, I found this book very readable — even as someone with an above-average cannabis knowledge base.

One of the things that really sets this book apart from potential peers is the steady stream of interviews — with figures both central and tangential to the modern world of weed — peppered throughout its various sections. Lhooq is a skillful interviewer and selected interesting people from all over the cannabis industry, from a recent Oaksterdam graduate to a “cannasexual” sex educator to a weed sommelier. These additional voices add depth and dimension to the book’s overall arch and neatly illustrate one of its primary theses: Enjoying cannabis should be a collective and collaborative experience.

While I wouldn’t necessarily give this book to a seasoned weed smoker or everyday dabber, I think it would make a great gift, especially for a friend who is looking to gain a hearty background on the modern weed scene but who’s less interested in the nitty gritty of cannabis, especially when it comes to global and national cannabis policy or the inner workings of cannabusiness. Not that those subjects feel like omissions — instead, they’d probably make the book feel flimsy and, soon, dated.

Instead, it’s got an “of-the-moment” vibe and a Cool Older Sister voice, both of which make it the kind of book I would have devoured as a teenager — right alongside other Urban-Outfitters-approved guides to fashion and pop culture. Not that there’s anything wrong with that.

Review: ‘Weed: Everything You Want To Know But Are Always Too Stoned To Ask’ Is Instructive Fun was posted on Cannabis Now.