Stoned Sex: Why Growing Weed Can Be Incredibly Therapeutic for Sexual Assault Survivors

[Canniseur: The consequences of sexual assault can be long lasting. PTSD becomes a big part of survival. This article explores surviving PTSD by using, and especially growing, cannabis. Growing and gardening provides its own rhythm and peace to victims of sexual assault.]

Welcome back to Stoned Sex, the column where I’ll be exploring the intersection of sex and sativas, intercourse and indicas, often through first-hand experience and interviews with experts.

For this week’s edition, we’ll be discussing PTSD from sexual assault and how growing your own cannabis can be a useful tool for addressing symptoms and aiding with recovery. Stoned Sex will be running every other week, so make sure to stay tuned for the next dose.

* Names in this story have been changed to protect anonymity

It doesn’t matter how much you love the person. Sometimes certain words, sexual acts, or touching will send a sexual assault survivor right back to the scene of the incident.

Once you’ve been assaulted, you live in a state of constant vigilance, always ready for an attack. You don’t feel safe in your own body, so sometimes you disassociate. You want to relax and enjoy your partner going down on you. But instead, you’re disconnected from your body floating in the corner of the room. You’re trying to escape the vivid flashbacks that play like a movie of your assaulter performing the same act against your will. Panic rises in your chest until it feels like you’ve swallowed flames. Eventually, you stop trying to power through it — and you try not to feel defeated.

Survivors deserve to enjoy consensual sex, but their bodies tells them otherwise. The symptoms of PTSD occur after an assault and can feel like they’re draining the life from you. Thankfully, many survivors use cannabis for relief. They can also find healing through mindfulness activities, such as gardening. Combining the two has a whole host of benefits for assault survivors, including connecting to their medicine, sharing it with others, and saving money — all of which induce mindfulness. 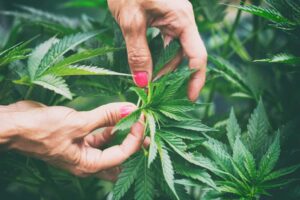 Growing Your Own Plants Grounds You in the Moment

Mindfulness is the practice of being in the present moment. Meditation and yoga, or anything that helps you be (and stay) present in your body, helps trigger this type of grounded awareness, which is why it’s beneficial to those with PTSD.

According to somatic psychologist and sex therapist Dr. Holly Richmond, gardening is an established tool that helps people get back into the moment and connect with the Earth. Using your senses helps you root: The feel and touch of dirt, the smell of fresh air and soil, and the sounds of nature all act as an anchor to keep you existing in the now.

“It’s all about being present in the moment,” said Dr. Richmond. “So much of my work with survivors is about moving into the present versus holding onto the past or reliving those triggers from the past. Gardening brings us more fully into the moment.”

Growing not only helps tether your feelings and thoughts, but it’s also the best way to ensure clean and safe access to medicine — medicine you grew.

“My garden is my sanctuary,” said Kristina Gandy, a grower and sexual assault survivor who has PTSD. “I’d go down there, and I’d tend to [the plants]. I’d sing, smoke, and hang out with the girls. Just being in the room — even if I wasn’t smoking — would make me feel better. Watching them grow from clones or little tiny seeds into these beautiful giant plants of medicine is the most incredible thing.”

Mindfulness aside, however, cultivating your own medicine is also a visual barometer for tracking your healing. “There’s something tangible you can see about moving from survivor to thriver when growing a plant,” Dr. Richmond said. “You have a little seed in the ground, and you’re nurturing it and growing it into something different than it was before, and for every survivor that’s part of what our goal is.”

The goal is not for survivors to forget or undo what happened. Rather, it’s to carry on with life without flashbacks (and other symptoms) becoming debilitating. “It’s about reframing the trauma,” Dr. Richmond explained, “and telling that narrative in a different way.” 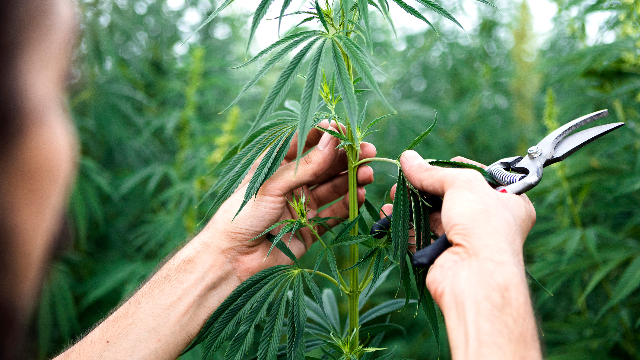 It’s Physical and Connects You to a Greater Cause

A common symptom of PTSD from sexual assault is dissociation, in which the survivor will mentally check out and leave their body. It’s a coping mechanism, and one that might have been used to survive abuse. But it can prevent survivors from fully experiencing life after the abuse is over.

Unfortunately, research on cannabis and PTSD symptoms is limited due to federal laws. But in addition to anecdotal evidence gathered from patients, research suggests that weed can reduce PTSD symptoms, including the nauseating ones of dissociation. Others report that cannabis makes dissociation worse, however. That’s why it’s so important for patients to have access to different strains and intake methods to find what works for them. The benefit of home growing gives you direct access to the plant, and you’re not limited to what’s available at the dispensary (or from your dealer).

“When I began cultivating cannabis, I slowly became more grounded in myself,” said Reba*, a professional cannabis farmer who’s been cultivating for 20 years and is also a sexual assault survivor. “In the act of cultivating, you’re moving your body and being physical when it’s hard to find any peace in your world.”

Research shows that cardiovascular exercise helps with PTSD treatment because it reduces symptoms, such as anxiety and depression. Growing not only gets the body moving, but it also helps survivors feel less alone.

“If survivors have the opportunity to get their hands into the earth, they have a better chance of remembering that they are not alone,” said Dr. Denise Renye, a renowned psychologist and sexologist. “It will hopefully remind them that they are part of something much greater than themselves, and that they are part of the Earth. It decreases isolation, allows for greater somatic awareness, embodiment, and provides a space for possibility.” 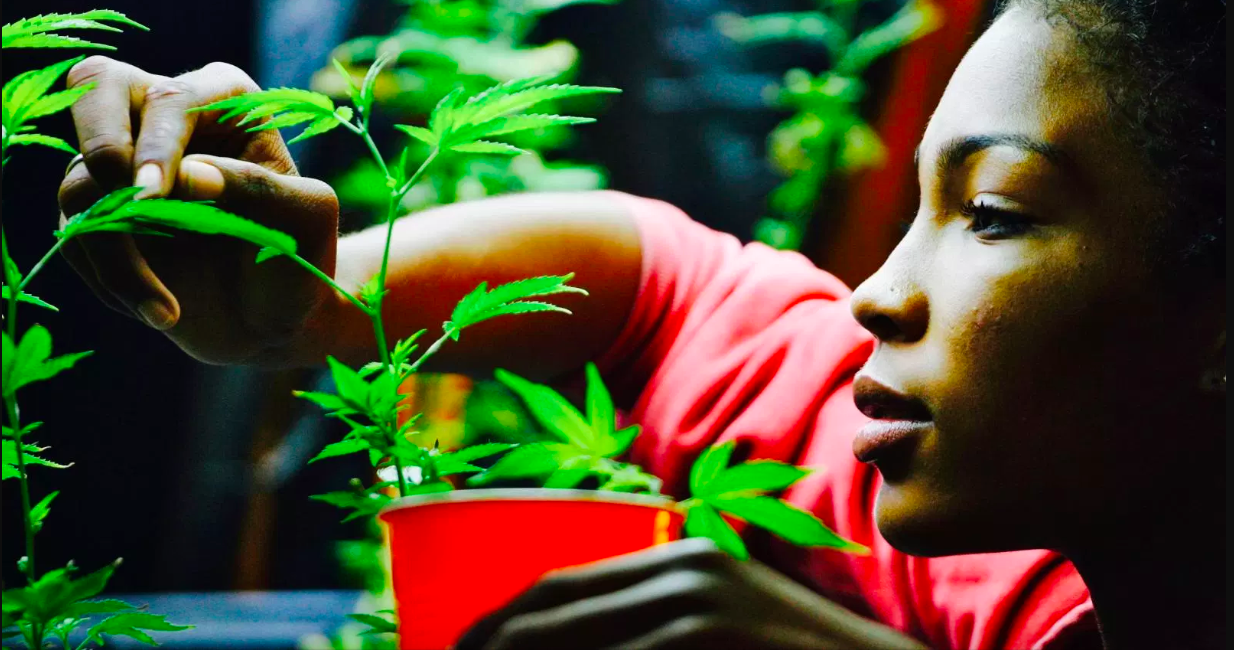 Home Growing Is Practical for Survivors

Survivors don’t need to work as professional cannabis farmers to share their plants with others, however. When Grady, a California home grower, finished cultivating her first crop, she shared it with friends, family, and other survivors she knew who also struggle with PTSD. She’s fortunate to live in California, a state that permits the sharing of homegrown pot without monetary exchange. But “sharing” laws vary across the US. For instance, you can give up to 2.5 ounces away in Michigan, but in California, you can only gift up to one ounce of cannabis at a time.

Massachusetts also operates under the one-ounce “sharing” rule, where Shanel Lindsay, a social equity advocate and founder of Ardent, is based. Lindsay was once arrested for growing her own medicine in Massachusetts. That’s why she diligently fights for others’ right to grow. “People love to share the wealth within the growing community,” said Lindsay, “meaning people will give cuts of rare strains and things that would not be commercially viable.”

Lindsay began growing four different strains: Girl Scout Cookies for a high-THC option; Cherry OG for a balanced hybrid; Critical Mass for an anti-anxiety CBD strain; and Bubba Kush for nighttime relaxation. While she loves them all, she says Cherry OG is best for daytime use. Plus, PTSD management generally works best with strains that treat symptoms and don’t totally knock you out. That’s why hybrids like Cherry OG make sense.

In addition to its therapeutic values, growing your own cannabis is simply more affordable. “Dispensaries can be very, very expensive, especially in very tightly regulated environments,” Lindsay said. “When you see growing communities form, what you see is that there’s very little expense around getting the plant.”

Even in legal states, black market cannabis continues to thrive. Who wants to pay $80 for an eighth of legal herb when cultivating at home can cut the cost by 80 percent? While the initial startup (and maintenance!) cost can be pricey upfront, once you’re up and running, the price point of using cannabis drops significantly.

States with medical marijuana programs require that patients have a cannabis card, which can cost anywhere between $30-$150 — sometimes more. People also often have to hand over sensitive, personal information.

Such hoops can be especially burdensome for people of color, LGBTQ+, and lower income communities, who face higher levels of persecution. These marginalized groups are also at higher risk for sexual assault than others.

“What we don’t want is to make people who have already been victimized be victims again and restrict their access [to medicine],” Lindsay said. “The easiest, best, and most private way to go about that is growing on your own.”

Not every sexual assault survivor who uses cannabis for PTSD can grow their own weed, and not everyone wants to. However, all cannabis users should educate themselves on local grow laws. If it’s an option, know that you have the power to create your own medicine.

“You get to pick your strains. You get to watch your medicine grow. You don’t have to depend on somebody else,” Grady said. “When the plant blossoms, we get to reap the benefits of Mother Nature.” Sometimes, those benefits can help us in more ways than one.