What It Was Like Doing Mushrooms With Bob Weir: An Essay

[Editor’s Note: When I finished this story, I couldn’t stop laughing. Read it to the end!]

Bob Weir was a founding member of legendary rock band the Grateful Dead. I ran into Bob the other night at an eatery in Northern California. A mutual friend had e-troduced us about a year ago, and we’d been exchanging emails about getting together ever since. But we could never manage to get our schedules to line up. I had already eaten, but he was just starting so I introduced myself and he invited me to join him for a chat while he ate.

Bob was everything I hoped he’d be: curious, engaged, and interesting. We talked about the Perseids meteor shower, the tastiness of the food at the restaurant, new immunotherapy developments in cancer, world music. We also talked about the Redwood trees surrounding us, and the Native Americans who lived on the land before us. Unlike other rock stars I’ve met, he wasn’t trying to posture — he was just being himself. And his self is very likable.

When his steak arrived, he asked me if I wanted some. “I just had it,” I said, “it’s delicious.”

“What’s your next book?” he asked.

“I’m writing about the aging brain. The neuroscience of it, and what we can do to stay mentally active and healthy.”

“That’s an important topic,” he said.

Given his well-known hearty ingestion of hallucinogenic drugs for the past fifty years, I was curious to know what he was doing to stay mentally fit, He described some medicinal mushrooms that he’d been taking. “They contain a neurotropic growth factor. After dinner, come back to my place and we can take some if you want to.”

I’ve never been a big drug user. While the people around me were experimenting with all kinds of chemical substances, I was learning to play the guitar, and working hard to become a neuroscientist. I’ve spent my life around people who were smarter than me, and I wanted to be sure I could keep up.

I did smoke marijuana with Joni Mitchell a few years ago when I was helping her put together her Shine CD. For one warm L.A. evening, I put my apprehensions aside and just enjoyed the ride. Taking mushrooms with Bob Weir of the Grateful Dead? Hmmm. He seemed intelligent and rational. I decided this might be an experience I could look back on and savor. I said yes.

We began the fifteen minute walk back to his place. “You know, I kind of worked for you about 30 years ago,” I said.

“Right, repairing speakers that you and the Dead had blown out.”

“There was no shortage of those.” he said. 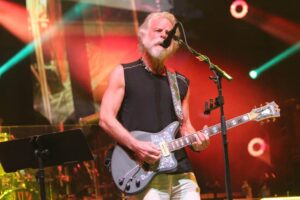 We both laughed. A. Brown Electronics had been a small-time hi-fi repair shop that barely eked by until the Dead discovered them. Re-coning speakers became about 95 percent of the company’s business. In those days, a concert stage speaker consisted of a powerful magnet with a thick, black cone-shaped paper radiating outwards, held in a metal frame. The output of an amplifier — an AC electrical signal — modulated the magnet, which caused the paper to vibrate and create sound. Send in too much power and the paper would blow apart under the strain. Re-coning involved shaping and inserting new paper between the magnet and metal frame. It was an eco-friendly alternative to buying new ones.

“Maybe we can play together later.”

I worked to control my exuberance. I tried to sound cool — like sitting in with Bob Weir was the kind of thing I did every day.

But if I get really high on mushrooms, I wondered, would I be able to play the guitar? Would my fingers do what I wanted them to do?

We got to Bob’s place and he started rummaging around a drawer in the kitchen. Was I really going to do this? What if I got too disconnected from reality? Quiet, I told myself. If anyone has experience with drugs, it’s Bob Weir. He’ll know what to do. Trust him.

He took out a plastic bag of a very fine brown powder, and a small bamboo spoon. He angled the spoon at about 45 degrees, put it in the powder, and carefully withdrew a large mound of the stuff. He then expertly tapped the side of the spoon with his index finger, letting some of the powder fall back in the bag. Realizing he had tapped too much,  he put the spoon back in for just a little bit more. With his other hand, Bob lifted a cup, and put the powder in it, then repeated the same measurement for a second cup.

“Here,” he said, “I’m going to give you a few days’ supply so that if you like it you can take it until you have a chance to get your own.” He measured out eight more portions and put them into a sealable plastic sandwich bag. Eight?! I wondered. What if I never came down?

He picked up the two cups with mushroom powder in them and brought them to the stove. “We’ll use hot water,” he said. “It dissolves better and doesn’t get clumpy.”

“Cool,” I said. He seemed to be thinking very clearly. Bob boiled the water, mixed the powder carefully with the bamboo spoon, handed me a cup, and together we brought the cups to our lips and took our first sip. It tasted like mushroom soup.

I felt a strange sensation on my tongue. Must be the umami receptors, I thought. In addition to the four basic taste receptor cells located on the human tongue (salty, sweet, sour, and bitter), Japanese scientists have discovered that we have a fifth group — umami receptors — that are stimulated by certain meat broths, soy sauce, and mushrooms. The western diet is lighter on these flavors than the Asian or Native American diet, and we rarely get a pure umami flavor in the food we eat. The inside of my cheeks, the roof of my mouth, and the sides of my tongue were tingling as these rarely used receptors woke up and started signaling the gustatory cortex in my brain. Either that or I was hallucinating.

Bob started talking about consciousness and meditation, and I found myself discussing neural synchrony. I noticed that patterns on the wall seemed to dance about. Not vividly, not cartoon-like, no images from Fantasia, just a mild impression, a kind of imagination. I knew the patterns weren’t really dancing.

Bob spoke about the shamanic tradition. “Much of the wisdom of the Native Americans has been lost,” he said. “Plant-based medicines, conservation practices. And the understanding that we really are all one.”

“Like mushrooms,” I added. “Fungi are connected underground via a subterranean web of mycelium.”

“Yes,” he said. “And they help other plants communicate with each other by attaching themselves to their roots — especially trees like these.” He gestured with his hands towards the Redwoods out his window.

In my mind’s eye, I could see the vast fungal internet underneath the ground below us. I felt connected— to Bob, to the trees, to plants in general, and to myself. Yes! Here I was in me. Happy. Secure.

Time seemed like a circle rather than a line; as though part of my consciousness experienced this feeling long ago, and I was just remembering it now. Bob’s voice sounded far away for a moment, and then very close. My education as a neuroscientist seemed to be circling my consciousness, as if I stood in the middle of a merry-go-round of different research findings, gently moving up and down, up and down.

Mushrooms are a mixture of proteins, unsaturated fatty acids, carbohydrates, and a variety of trace elements. One of the active ingredients in the mushrooms we took is called Hericium Erinaceus Polysaccharides, commonly referred to as HEP. HEP leads to the secretion of neurotropic growth factor. That, in turn, increases levels of acetylcholine in the brain, which is normally secreted in great quantities during Stage IV sleep. The dreamy quality we associate with sleep, or being in certain altered states, is mediated by this neurochemical. HEP rapidly increases gene expression of neurotropic growth factor in the hippocampus–the seat of memory. This could simultaneously improve the storage of new memories, and the retrieval of old ones, even long lost memories that heretofore seemed to be forgotten.

HEP also has neuroprotective and neuroregenerative qualities, allowing for the repair of damaged nerves and the growth of new ones. It has been shown to improve overall cognitive performance and is even effective in people up to 80-years-old who are suffering from mild cognitive impairment. Some studies have shown that it reduces depression and anxiety. At that moment, I was certainly feeling contented and unstressed.

Another ingredient in the mushrooms we took is Cordyceps Militaris, which has been shown to diminish anxiety while boosting energy levels. Think about that for a moment: more energy but also less anxious. Coffee tends to boost energy levels but at the cost of increased nervousness and anxiety.

We grew quiet. I couldn’t say how much time had passed. We looked at the bottom of our empty cups and then at each other.

“The effect is subtle,” Bob said, “but I feels like it makes my day a little bit lighter and my focus a little bit better.”

My mouth was still tingling with stimulation of the umami sensors. I was filled with the overwhelming sense of my connection to nature, to Bob, to an ant that was moving across the floor. I was one with the insects. My tongue seemed to be vibrating at the spiritual frequency of the universe.

Bob turned to me as I was studying the wood grain in the table. “You realize of course that these are not hallucinogenic mushrooms — they’re purely medicinal, perfectly legal. I bought them on Amazon.com.”

What It Was Like Doing Mushrooms With Bob Weir: An Essay was posted on High Times.