[Editor’s Note: California’s tolerance for lead in vape carts is the lowest of all states, plus Canada. Zero tolerance for us all, please.]

Looks like it’s time to get the heavy metal out of vape carts.

Vape carts are a surging, highly profitable new sector of legal cannabis. They let you inhale a cool, potent cannabis mist anywhere at any time without anyone noticing. Since January 1 in California, all legal cannabis vape carts are subject to stringent new testing for heavy metals, including lead. Labs are reporting that some percentage of vape carts are showing a concerning amount of lead.

That’s a problem, because the Centers for Disease Control has found that there is no safe level of exposure to lead. It’s a neurotoxin that can decrease IQ, as well as sicken and kill you. The US and other countries have spent decades throttling lead exposures—banning lead paint, leaded gasoline, and other sources.

“California’s high standards promise to help get the lead out of e-cigarettes, too, not just in California but worldwide.”

“Lead is a boogeyman metal,” says Peter Hackett, a vape hardware expert with the company AiR Vapor, which imports vaporizer cartridges to the US. “Baby boomers and their children are very aware of its dangers.”

At SC Labs, founder Josh Wurzer reports that about 0.5% of the vape cart batches he’s tested have failed for lead. “We’ve seen some issue,” he said. “Out of the thousands we’ve tested, we’ve had a very small portion over the limit.”

Other labs might have higher fail rates, Wurzer said. “I have heard anecdotally some people have had issues with weird, wonky metal results and a ton of failures.”

David Hua runs Meadow, a cannabis software company, and sits on the board of the California Cannabis Industry Association. He, too, is hearing reports about lead in carts.

“We’ve had a number of people that I’ve run into who are saying that there’s issues with cartridges passing — primarily in heavy metals,” Hua said.

Peter Hackett, with AiR Vapor, says there’s definitely a lead problem in vape carts. It’s a global problem, he says, and it starts at the metal foundries in China.

A spokesman for California’s regulators — the Bureau of Cannabis Control — reviewed Leafly’s findings and affirmed they are correct. 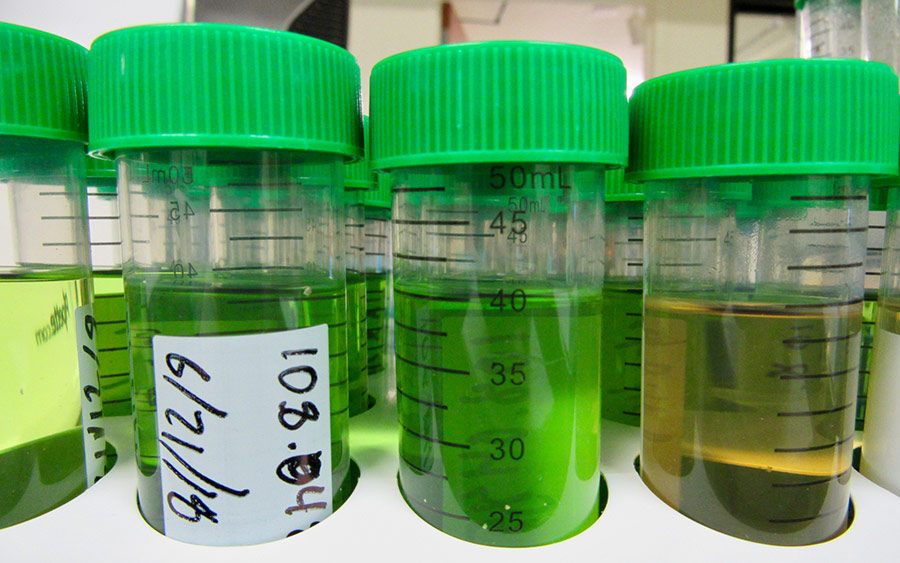 Why Is There Lead In Carts?

The Chinese add lead to brass and copper to make the metals more moldable when shaping all types of electronics, Hackett explains.

Chinese foundries had been following the toughest rules in the world, which until now had been European laws capping lead in metal electronics at 4% lead, or 40,000 parts per million. That standard is now outdated.

California’s standard, as of Jan. 1, 2019, is 0.5 parts per million (ppm) lead in a cannabis product. That’s more than twice as strict as Washington’s limit of 1.2 ppm. Oregon does not ban heavy metals in cannabis products.

What’s In A Cartridge?

A vaporizer cartridge is a tiny tank that holds cannabis oil. Little holes inside the bottom of the tank allow cannabis oil to flow to a metal gap, where an electrical current from a battery flash-boils the oil, creating an inhaled aerosol.

Vape carts can be made of all plastic, or a mix of plastic, metal, and glass. Just because a cart contains 4% lead in its metal does not automatically mean the oil inside the tank is contaminated.

Wurzer suspects that cannabis oil—which is acidic—is leaching lead from some carts, causing the oil to fail tests. “Maybe some oil is picking up some of the lead and failing there,” Wurzer says. “We have tested actual empty cartridges and confirmed a number of ‘over the limit’ hits for lead.”

Hackett agrees. The best vape carts—so-called “CCELLs”—may pass or fail California testing requirements depending on which lab is doing the testing, and the methods the lab uses.

“The lab has to be very careful to make sure they’re not actually contaminating the concentrate with lead,” says Wurzer.

CCELL carts that are failing test at 0.6 or 0.7 ppm lead, Hackett said. That’s legal in Washington state, but not in California. The ones that are passing often do so barely—at 0.3 or 0.4 ppm lead. Hackett said even if a CCELL tests at 0.6 ppm, it doesn’t necessarily mean the carts have 0.6 ppm lead, due to the issue of variable test results from differing lab testing procedures.

CCELLs are the best carts China makes, Hackett says. Cheaper cartridges might have more lead, because more lead makes metal more moldable, thus shaving pennies off a cart’s production price per unit. At scale, that adds up to millions of dollars.

“Seventy percent-plus of the visible brands are using CCELL. This is something that’s widely affecting the industry,” says Hackett. “But it’s only getting popped in California,” because of the state’s strict testing requirements, which are the toughest in the nation.

The best way to ensure lead can’t leach is to prevent any lead from being in the cart in the first place.

Removing lead from the equation requires changes way up the production chain—which means revising the metal recipe at the Chinese foundries. But Chinese foundries are offline right now for Chinese New Year. Hackett has ordered lead-free carts, but they won’t hit the California market until the end of February. The increased per-unit cost of lead-free carts will not be felt by consumers, he says.

California’s high standards promise to help get the lead out of e-cigarettes, too, not just in California but worldwide. Canada is considering using California’s standards, according to Wurzer.

“As California goes, so goes the world,” Hackett says.

The Bottom Line For Consumers